We learned a few new Hebrew songs tonight on the bus. Katherine taught them to us as we traveled across the Judean mountains toward the Mediterranean coast from the Dead Sea. We had to stop at a checkpoint and have some officials get onto the bus to make sure that we weren’t dangerous. We tried to sing Hava Nagila for them, but I guess we must have sounded awful because they didn’t stay to listen.

Morning sunrise over the Dead Sea

We were at Masada quite early, but there were already crowds of people. Our poor tour guides were almost frazzled trying to keep us all together and find a place where we could have teaching sessions that would be undisturbed.

Masada means “Fortress”, and that it is! Herod’s paranoia made him build a casemate wall fortified by no less than thirty towers all the way around an inaccessible mountain, all for a refuge no one is sure that he ever used. He had six more fortresses stationed on the border of the Roman empire (but still in Israel), although this one really was invincible. He really had no right at all to be the king of Judea, but he made sure that he would remain king by killing anyone who had more claim to the throne than he had. Sound familiar?

He was descended on his Father’s side from the Edomites, who were forcefully converted to Judaism, on his mother’s side from the affluent Nabatean desert dwellers who were wonderful builders, and he married into the Hasmonian, or Maccabean family. The politics were quite complicated, and Herod had a reason to be afraid; although we decided that he chose a living death rather than to give up kingship.

We had a session in the synagogue where we all sat in the wonderful seats around the outside walls, and Joe gave us a lecture about sitting in the “chief seats” and making the older people stand or sit on inferior seats because we young ones get there first. It was really wonderful to watch the results of that lecture.

Way at the south end of the mountain, we yelled “Yeshua!” in unison and listened to the echo reverberate around us. It was a most amazing sound! The very rocks cried out His name.

I must tell you about one more session from Masada. The Zealots who ended up there after Jerusalem fell held on to their faith and their beliefs until the very end. It was amazing to see their dedication for keeping God’s laws, even when no one was watching. They could have lived a rich life, but chose to keep on living God’s way. We saw a Mikveh (ritual bath) that they installed right on top of lovely mosaic tiles inside the Roman bath, and other evidences that they didn’t live a sumptuous life in the well-stocked royal palace, even though they could have.

cable cars, yes we rode them 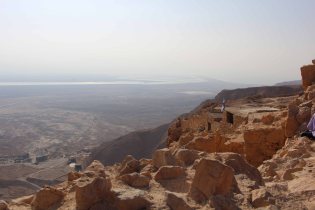 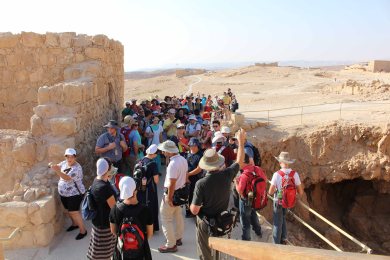 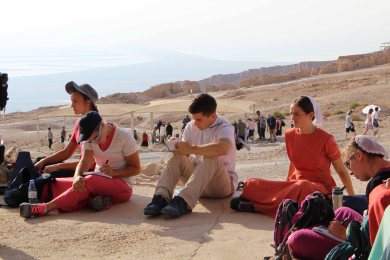 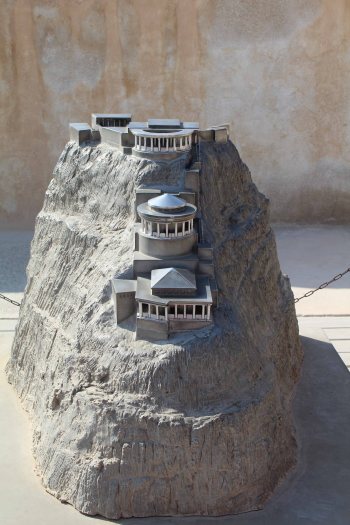 model of Herod’s palace on Masada 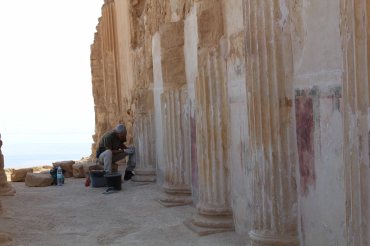 Ein Gedi was our next destination, where the water springs right out of the rocks and in the midst of the desert, there is lush green growth everywhere. I understand that this water has a 1,000 year process to soak down through the rocks from where it rains until it reaches rock that will not hold water, then it seeps out from the stones. If God can provide water for us 1,000 years before we ever get there, I am sure He is able to provide for any need we might face! Jeremiah 2:13 says, “For my people have committed two evils; they have forsaken me the fountain of living waters, and hewed them out cisterns, broken cisterns, that can hold no water.” God is saddened when we forsake what He provides for us for something that we think is better.

I don’t know exactly what was taught at En Gedi, as I was having a little unplanned excursion all by myself. Because of my carelessness, I got separated from the group as we were leaving Masada; so I got to spend about an hour and a half all alone watching the huge fortress, and reminding myself that God is my fortress, and He is invincible.

At first I raced around searching for someone, anyone from our group, then I realized they could never find me like that, so I sat where I thought they could find me. After about half an hour had passed, I realized that I must have been forgotten, and went to find help. I was so angry at myself, and sure that the group was half an hour down the road and would have to come back to pick me up on an already tight schedule. If I could have dug a hole and crawled in, I would have. Since I couldn’t do that, I went to look for help. I had no phone or even a memorized number to call anyone, not even a clock to tell what time it was. Through much perseverance, I got on the phone with Sar-El tours, they called a bus driver who knew our driver, (they didn’t seem to know Katherine, even though she works for them) and this dear man came to find me in the melee of tourists and told me that when his group comes off Masada he will take me to En Gedi to meet my group. He was on the phone with our driver, Menachem, and gave his phone to me and I talked first with Menachem, then Renita, since she hadn’t gone along on the En Gedi hike. He told me it would be at least two hours before his group was coming down, and showed me where to sit and he would come find me. It couldn’t have been much more than an hour when he came and told me that Menachem was coming to pick me up. How good it was to see Caroline and Menachem and our orange bus. And how the group welcomed me back, no matter that the fault lay with me. I believe it happened for a reason, even though we may never know why. I truly know now that those who sin do not need to be reminded of their mistakes. They need only be welcomed home again!

Our last stop of the day was at Qumran, where the Dead Sea Scrolls were found. These are the only scrolls ever to be found in the land of Israel, and are important because they prove that the Bible has not changed even in the thousands of years that it has been copied and re-copied.

The Essenes were a strict sect of Jews, possibly some priests who lived communally and spent all their time either studying or copying scripture and working to support themselves. They must have hidden the scrolls before the Romans crushed the Jews, and there they stayed until 1947 when a Bedouin shepherd searching for a lost animal found a cave with several scrolls. They were passionate about keeping God’s laws. Joe challenged us to become as dedicated to the Word as they were. Jesus chose 12 disciples and they changed the world! There are 54 of us, and how much could be accomplished if we became as passionate about God as the Essenes were!

Tomorrow we have two concerts, one in the morning, and one in the evening, so please continue to pray for us. People are very open and love to hear us sing wherever we go.